Within activities of international multilateral research network FIRElinks (Fire in Earth System: Science and Society, COST Action CA 18135, 43 collaborating countries) researchers from II SAS took part in preparation of review publication on current state and national perspectives of fire research in Europe which is in press. The study… Read more »

We would like to congratulate to our colleague Mgr. Branislav Rabatin for winning scholarship for doctoral study at the Florida State University. We wish Branislav all the best and full success in his studies. colleagues from the Department of Parallel Computational Methods and Algorithms

The cooperation agreement between the Institute of Informatics and the NDS, a. s. company was signed on August 30, 2016. NDS, a. s. is a company with 100% participation of SR represented by the sole shareholder (the Ministry of Transport, Construction and Regional Development of SR). The aim of the… Read more »

The cooperation agreement between the Institute of Informatics and the PPA INŽINIERING, s.r.o. corporation was signed on August 22, 2016. PPA INŽINIERING, s.r.o. is one of the leading companies on the Slovak market in the supply of electric systems and control systems for chemical industry and road management (motorway tunnels… Read more »

On August 10, 2016 a contract on cooperation between the Institute of Informatics and the University of Zilina was signed. The collaboration is related to solving the joint project Models of formation and spread of fire to increase safety of road tunnels (project no. APVV-15-0340) supported by the Slovak Research… Read more » 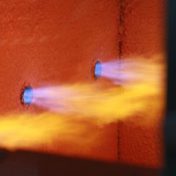 On January 13-14, 2016, a large-scale test of fire resistance of selected parts of wooden construction was conducted under the guidance of prof. Ing. Juraj Olbřímek, PhD. and Ing. Soňa Leitnerová from Slovak Technical University in Bratislava (Slovakia). The test was carried out in the experimental laboratories of the FIRES:… Read more »